I started writing a novel over two years ago. Initially I kept quiet about progress but it wasn't long before I announced my intentions here, on my website.

At that point I had about 45,000 words (roughly half the word count I was aiming for) and progress showed no signs of stopping. I felt very confident.

Then suddenly, about a year ago, I stopped writing.

There wasn't any particular reason. I didn't get hit by a bus, or decide writing wasn't for me. I just woke up one day and didn't sit down to write anything before going to bed at the end of the day.

When I did finally decide to sit back down and open the draft, I was shocked at how inconsistent my writing was. Character names and locations kept changing, important plot points contradicted each other, and some of the subplots faded away entirely, never to be mentioned again.

The worst bits though, were the large gaps in the story where I'd skipped ahead because I hadn't known what to write and told myself I'd figure it out later.

"That came back to bite me sooner than I'd hoped."

I have read that it's good to get some distance from your story for just this reason; to look back at it with fresh eyes so you can see the flaws more clearly. Then it's up to you what you choose to do with this new-found perspective.

Deciding to try and salvage things, I embarked on a merciless editing spree, fixing inconsistencies and deleting large swathes that no longer made any sense. By the time I was finished, my word count had gone from roughly 46,000 words back down to 21,000. Less than half what I'd been so smug about only a few months earlier.

If this sounds painful and demoralising, it was, but I was also surprised to find the remaining text read much better than it had before. The themes I wanted to explore were much more obvious and the meandering plot was far better defined and more cohesive.

Since then, I've made the conscious decision to slow down. To actually take the time to learn more about the process and what makes a satisfying story work in the first place. I'll outline (pun intended) the advice I've found most helpful so far.

This was the big one for me. If you've ever looked into writing a novel, chances are you've come across the terms 'pantser' and 'plotter'. The basic idea is that some writers like to fly by the seat of their pants, and others prefer to plot every last detail out before getting started.

(I've also heard them referred to as 'Gardeners' and 'Architects').

I initially began writing without an outline. Starting with that terrifying blank page, and not knowing the first thing about writing, I opted to leap in head-first.

This seemed to work in the beginning, but it only got me so far and I'm now dumbfounded this process works for anyone at all (apparently it does). What has worked for me is outlining basic plot points and deciding on story structure ahead of time. Research of the most popular methods lead me to the tried-and-tested 3-act structure: 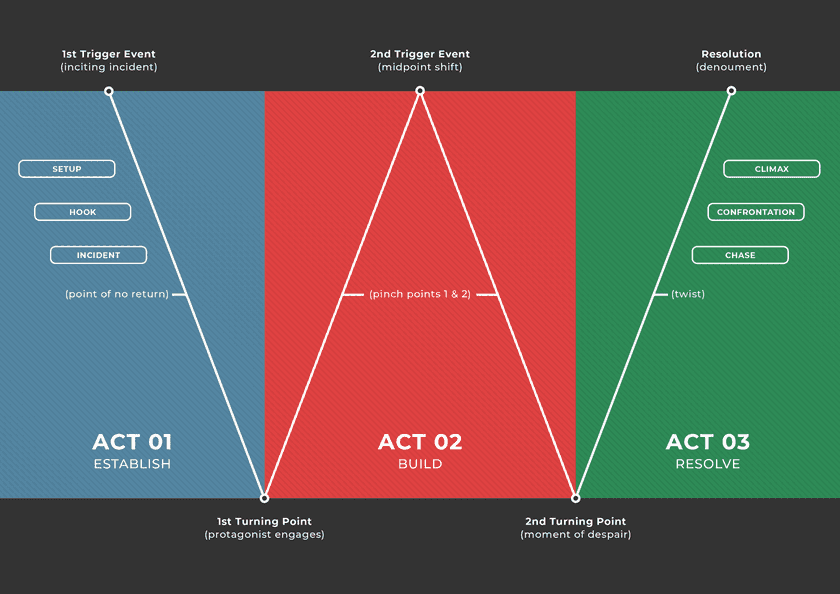 Starting with the 1st trigger event at the very beginning of the story, we follow the protagonist's journey, with its varied triumphs and setbacks, until we reach the climax and resolution.

Along the way, we hit several common plot points that inform how things are going for our protagonist (note the moment of despair at the end of Act 2).

"The night is always darkest before the dawn."

The idea isn't to generate stories that are all basically identical, but that many satisfying stories can be told utilising a pattern we're all familiar with. Well-known examples include Star Wars, Harry Potter, and The Matrix.

Chiastic structure, or ring composition, can also help when outlining. Overly simplified, this is symmetry in storytelling, both in terms of recurring plot elements and common themes. There's a neatness to symmetry that is satisfying and easy to recognise. A quick example in storytelling might be;

At the beginning of a story, perhaps a protagonist isn't taken seriously by their peers and longs to prove themselves. To this end, they attempt something daring but it goes horribly wrong and their situation is made even worse.

Symmetry demands that the problem is solved in a similar manner.

Things are bad, but the protagonist makes another daring attempt to right the wrong. After succeeding against all odds, they are accepted by their peers and finally acknowledged.

Chiastic structure is arguably even more useful when used across a wider collection of stories (think of famous movie trilogies or a series of books with several installments). It's an excellent way of reminding users of plot points and themes that are central to your story.

Let's look at the Harry Potter series as an example: 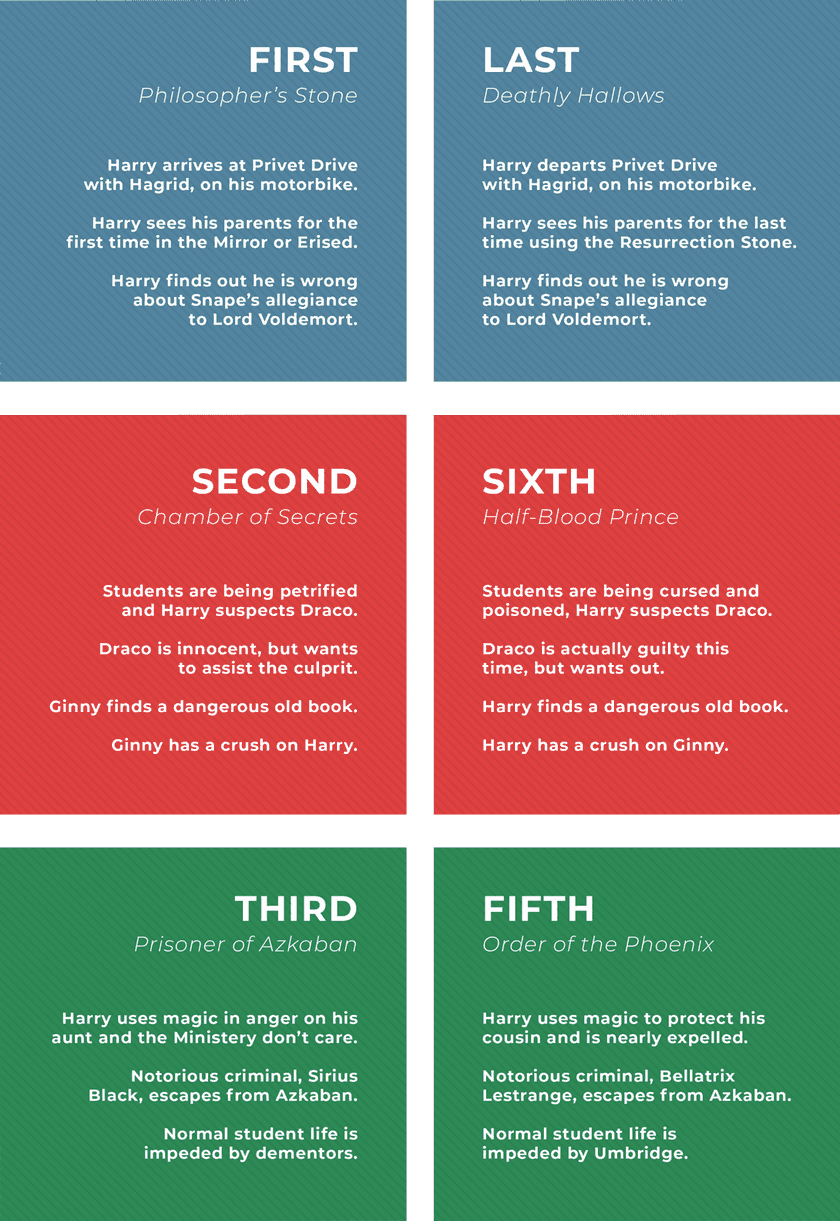 We're excluding the fourth novel, The Goblet of Fire, from the comparison. It serves as a midpoint shift in the series, between the first introduction of the wizarding world, and then the darker tonal shift after Voldemort's return.

The examples highlighted above are just a small selection, plenty of other instances can be found in the Harry Potter books if you go looking.

One thing worth noting, is that this level of cohesion requires a lot of foresight and planning. It's a massive commitment to decide how your series will end before you've even finished the first installment. But if the results are worth the effort, it might deserve some consideration.

Following on from that, I've found it helpful to work on your ending as early as possible. It sounds counter-intuitive, I know, but hear me out.

When you're solving a jigsaw puzzle, which pieces do you prioritse finding?

The corners and edge pieces. Every time.

You likely already have your initial piece of the puzzle (perhaps this is a character, or a theme. It could be a setting, or just a vague but intriguing idea you want to explore). Whatever it is, it's a start. So what's next?

If you immediately try and find the next piece along, you might run into an issue. Your first attempt will probably match up seamlessly with your initial piece, but it's unlikely to take your story off in a new direction.

I fell prey to this issue more than once when I first started writing. I was happy enough with where my story began, but would run out of steam by the time I reached the middle. It just didn't seem to go anywhere new.

This is where the counterintuitive advice comes in.

For now, ignore how you arrive there, just try and imagine a satisfying ending using whatever piece you started off with. If you have a character with a flaw, do they overcome it? If you have a theme or an idea, can it stand up to scrutiny? If all you have is a setting, does it survive being threatened or respond to change?

"Ask questions, then answer them."

Think about the emotions or thoughts you want to leave your reader with. Do you want to write a happy ending where good prevails over evil, or do you want something more bittersweet?

Maybe you'd like to leave your ending ambiguous or pose a challenging question for the reader to ponder long after they've read the last line.

Whatever you decide, this helps you build your ideal 'ending' piece.

Rather than staring at a blank page, you can now start problem-solving. Namely, how do we get from your 'beginning' piece to your 'ending' piece.

Solving problems is much more straightforward than twiddling your thumbs and waiting for inspiration to strike. Try and focus on one problem at a time.

While connecting up your 'beginning' and 'ending' pieces, you'll learn more about your characters and setting. In the process, you might decide to introduce a subplot that explores a new idea or theme. This could result in a new piece that looks like this:

Things have gotten slightly more complicated, but it's still just a problem needing a solution. An easy way to integrate this subplot is to provide some foreshadowing and then ensure it's wrapped up neatly too. 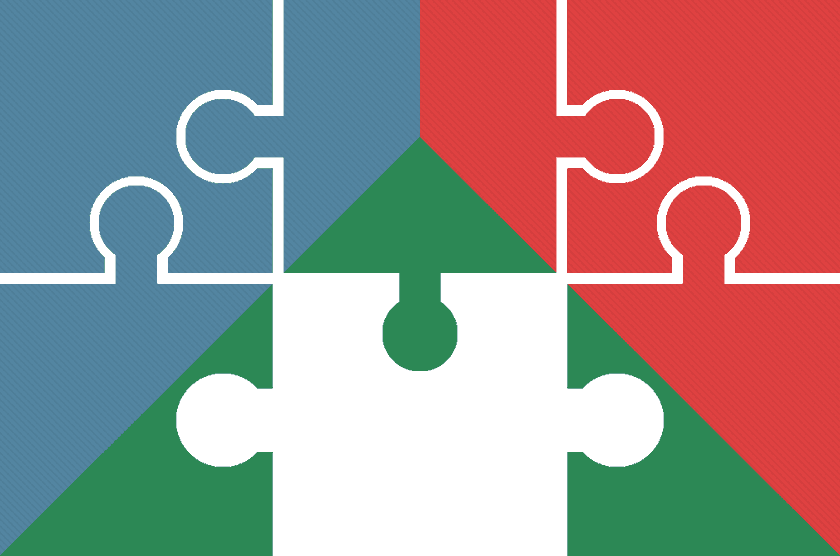 Finally you'll begin to reach a point where it's clear how to fill in any gaps because you have all the surrounding pieces there to inform your choices. 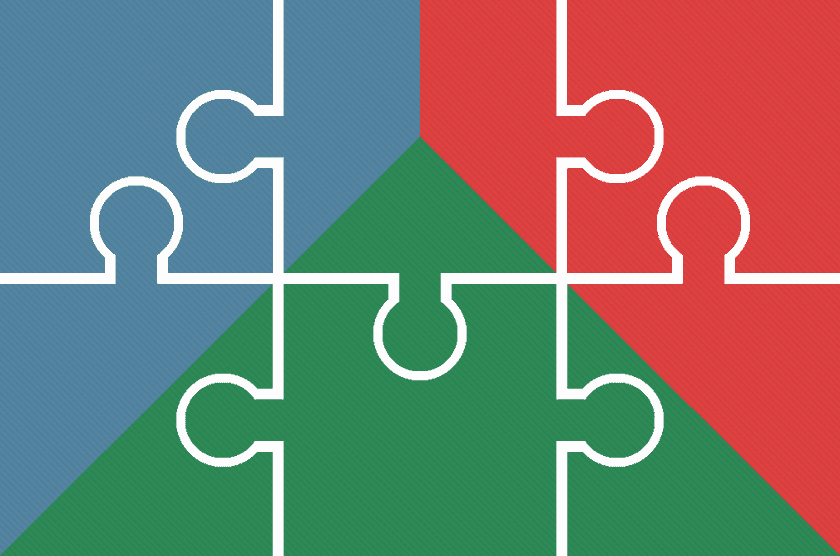 With any luck, all your pieces now fit together and the bigger picture becomes clearer. Constructing stories in this way has helped me immensely.

The last thing I want to mention sounds a bit silly.

Personally, I need all the help I can get when it comes to staying focused. It's unfortunate but I have found a couple of quirky ways to trick myself into sitting down and getting some writing done.

The age-old method of breaking down your target word count into smaller, more manageable, chunks is always a good place to start.

For example, if your target word count is 90,000 words, breaking it down to 1,000 words per day makes writing much less intimidating. It also gives you a solid estimate for how long it'll take, in this instance - 90 days (if you stick with it). Being able to see the finish line is all the motivation some people need.

1,000 words a day is a common goal for writers. My psychological trick is actually to cheekily aim for a lower word count, like 900 words a day or even lower.

Straight away, you're being 'kinder' to yourself. You're also making it easier to succeed each day you sit down to write. With every successful day, you're building a new habit and making the next day easier.

It's also worth mentioning that celebrating milestones (20,000 words, 50% of your word count, etc.) is important. Recognise the work you're putting in and cheer yourself on.

These insights have made a big impact on my own writing, so hopefully they will be of use to others as well. Of course, I've yet to actually finish my first novel, so we'll have to wait and see if any of this really helps in the long run.

If (when) I do finish and manage to see publication, you can trace some of my success back here. Good luck, and don't give up.